If you’re preparing for your trip to Ireland, you might find that even though we do speak english here, it might not seem like it at times! We’ve taken certain liberties with the English Language, but if you follow this guide to Irish slang phrases, you’ll know how to have the craic without acting the maggot, so yer man in the pub won’t batter you. Confused yet? Don’t worry, we have your back…

No, that friendly Irish guy isn’t offering you anything more than an invitation to tell him if you have any news or anything interesting going on. A mere substitute for “How are you?” and one of the most commonly used Irish slang phrases of all time!

Another way to ask if someone has any craic. After a few days here you’ll see that we prefer you to tell us how you are, rather than just use a boring word to describe how they’re feeling.

Usually used to bring someone back down to earth. Say you’re telling your friend that you met some celebrity last night, they might use this phrase to point out that they’ve never heard of said celebrity, so they mustn’t be very important anyway.

This just means “Ok”. It doesn’t mean grand in a “Grand Budapest Hotel” sort of way, but more in a passing acceptance of what you’ve just been told. If someone tells you they’ll be ten minutes late, you can tell them “That’s grand”, almost like an Irish version of “No worries”

This is the most evil phrase of them all. If some Irish person convinces you to go for “just the one”, meaning one beer, you have a rough night ahead of you. What’s going to happen is that they’ll order the beers first, paying for yours, and after that it’ll be your round, which brings us to our next point…

Not a uniquely Irish concept, but one we embrace wholeheartedly. The idea is simple, when you’re having a few drinks with some friends, only one of you has to go to the bar at a time, you each take turns and go round the table in order. Rounds take no prisoners, make sure you don’t get stuck in a round with experienced drinkers or you’ll find yourself in trouble. If you want out of a round, you’re going to have to make sure you get your round in and then declare to the table that you’re out of the round.

A classic phrase made eternal by James Joyce in Dubliners. Used when you’re so busy running around getting everything done that you literally don’t know when to say figuratively.

If you hear this, you have clearly said something so ridiculous that it only warrants a ridiculous response. This is a very versatile phrase that can be pretty much be used in any context where you need to convey that you in no way believe what you have just been told. If someone tells you that they did something amazing, you can likewise say “You did in your shite”.

Can be interchanged with “really” or “very”, but usually only accompanied by another Irish slang term, such as; class, savage, or shite, but for some reason, not deadly.

Used by themselves, these words can be expressions of happiness. If your boss says you can go home early, you can reply “class!”. It can also be used to describe something as really good. If you see an amazing goal, you could describe it as savage, or even “pure class”

Stop, don’t move any closer, that’s not what we’re saying. This is a link phrase, either to get you to expand on something you had mentioned, or to move you completely on to a different subject that they actually want to talk to you about. “Come here to me, what’s the story with that lad I saw you with the other day?”

Maybe one of the most robust phrases in our lovely language. You can use it outright by itself as a slightly less aggressive F-word, like when you stub your toe. You can refer to someone as a bollox if they’re annoying you, but also if a friend of yours did something incredibly stupid, you can fob off blame by telling everyone that “He’s only a bollox”

Like doesn’t really mean anything like. You can pretty much throw it in at the end of any sentence like. Especially prevalent if you go to the southern parts of Ireland, with Cork being a stronghold of ending sentences with like, like.

A general confirmation that the person you’re speaking to heard you and is happy with your message. However, you’ll need to listen for tone here. It can also be used as a passive aggressive ending to a conversation where your conversation partner isn’t too happy with what’s just gone on.

This phrase can be used to implore the speaker to stop talking, but is more often used as a way to express a happy disbelief of events unfolding in a story. You’ll have to listen out to how the word “stop” is used. If it’s a hard and fast “STOP” they want you to stop, but if it sounds more like “shtop” then keep going, in fact, embellish more.

Have you ever looked at maggots and thought that they were having a whole lot of fun? Well clearly we did, because if someone is acting the maggot then they’re joking around, but their tomfoolery isn’t benign, it’s causing a disturbance and needs to be stopped.

We have a great affinity for beer in Ireland, but we’re not such a huge fan of beers in bottles. It’s heavy, they clink when you carry them, why wouldn’t you just get a lovely big bag of cans instead?

When you get a message on a group chat about a session in someone’s house, you need to run out and buy yourself a few cans, grab whatever instrument you play and get yourself to the house. A session is the best kind of house party, you’re most likely not going out to a bar, in fact, you’ll probably still be going strong when the pubs close, singing along to ballads, pop songs and surprising amounts of acoustic versions of gangster rap.

This is a confusing one. We’re not implying that you own a man. It basically just means “that guy” whose name I can’t remember. If you’re referring to a woman, you would say “your one” (yer wan)

A general expression of being drunk. Can be used with the prefix “pure” to get full expression. Being pure locked can be a fun time, but it can also lead to The Fear

The Fear is an awful type of hangover that you genuinely fear will never end. Often happens after a good session. Shakes, headaches and promises of never drinking again are common symptoms. Netflix binges and fast food delivery has made great inroads in finding the cure for The Fear. What people did before these modern inventions is unknown and we can only suspect that many died.

A classic filler sentence that means nothing at all. Usually when both sides are at a loss for words, either because they don’t really have anything in common and don’t really want to talk, or something bad has happened. Probably most used at funerals. If someone hits you with a “Ah sure look” you can nod stoically and say “Sure listen”, again meaning nothing, but somehow conveying everything.

The phrase used by country folk for Dublin. Smoke is pronounced “Schmoke” and pretty much only used by the older generation to tell you where their kids have gone. Also used by country kids in Dublin who want to keep their distance from Dublin and not ever accept that they are city people.

No bond is stronger than that of the men and women of the West of Ireland to their home. Everything is better in the Wesht, and after visiting there, you’ll be convinced of the power of the Wesht too.

A derogatory term for anyone from outside Dublin, used almost exclusively by people who have barely crossed the River Liffey to see the other side of Dublin. Derived from the idea that anything outside Dublin is a bog.

The toilet. Similar to a John, but not one of the lads who wrote the Bible.

This just means happy, but we really mean it. A sunny day, sitting out with a few cans and some friends and you’re happy out.

If you’re lucky in your visit to Ireland, you might meet a nice Irish girl or guy and you might have a sneaky kiss. Lock up those lips, let that tongue go mad, and you’re having yourself a shift.

Confusingly this means “I will absolutely not”. Tricky.

A naggin is a 200ml bottle of alcohol, and a “shoulder” is a 350ml bottle. Very common for Irish college students to go to the pub “Crouching Tiger” as in Crouching Tiger, hidden naggin.

A very attractive person. Not a compliment you would use if your parents are within earshot, seeing as the expression to “get the ride” is often seen as a natural progression from getting the shift.

Usually used to describe the pub the previous night when there were too many people inside, hindering the route to the bar.

Simply someone who does something a bit cheeky for personal gain. You’ll get called a chancer if you try to skip out on your round when it comes to your turn.

If you hear this phrase, be careful. You’ve been promised a fight, we’re all friends here, no need for it.

Absolutely everything. “She left me and took the kids, the dog, the whole shebang”

A common insult for someone not very bright. Isn’t the most harsh term though, often used by parents chastising kids playfully. Floyd Mayweather called Conor McGregor an eejit in a press conference, we’re still trying to find out who taught him that.

Small. Inherited this from the Scots, used mostly by the more northern parts of the Island, a colonial hangover that we can accept because it makes us sound so harmless. “He’s only a wee lad” – He’s just a small person.

An amazing word that can take the place of pretty much any noun. Especially useful if you forget the name of the thing you’re looking for. “Did you see my yoke? I left it on the yoke”

What have we left out? Do you know any more that you found interesting/ funny / confusing? Let us know! 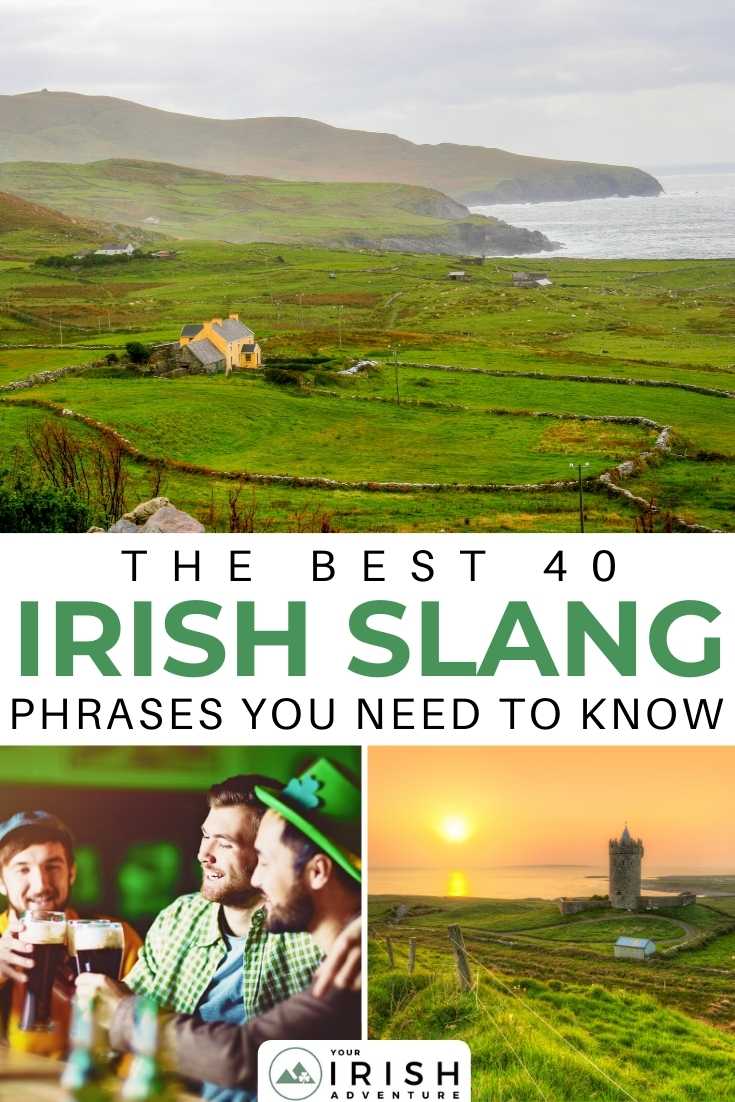 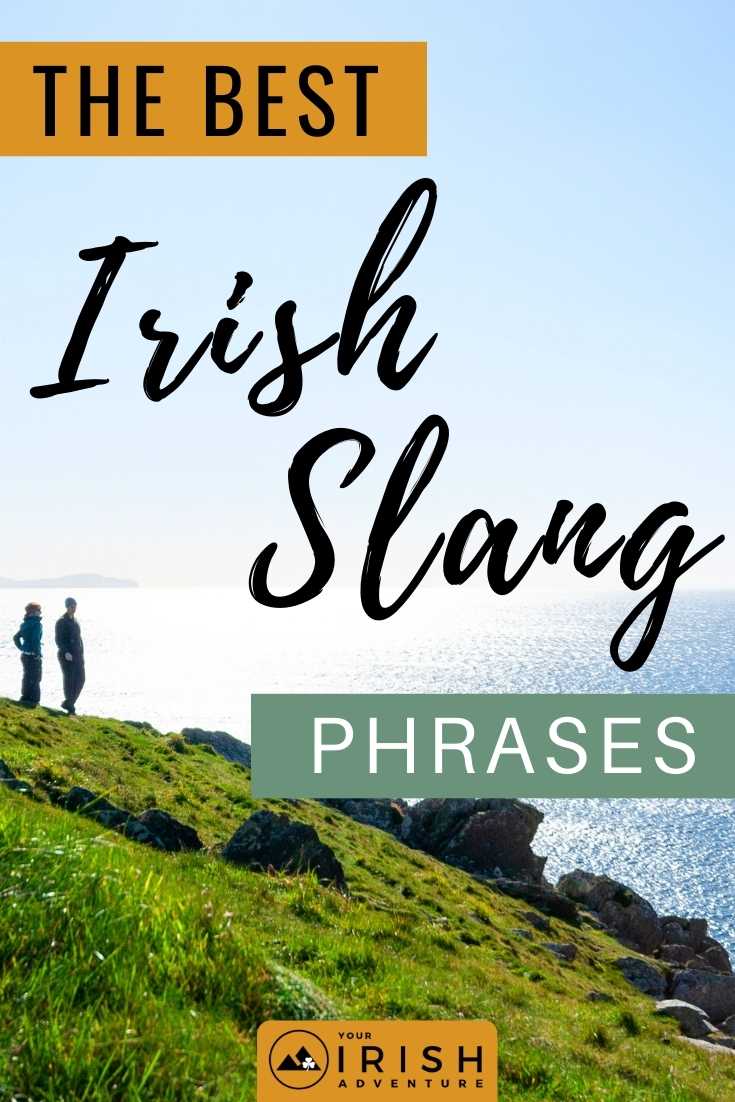