A Perfect Weekend in Derry: Where To Eat, Drink, Stay and Play

Planning a weekend in Derry? Your Irish Adventure writer Sarah McKinley takes us on a journey of delicious food, fun facts, historical walks and shares her tips on where to eat, sleep and play in beautiful Derry city. 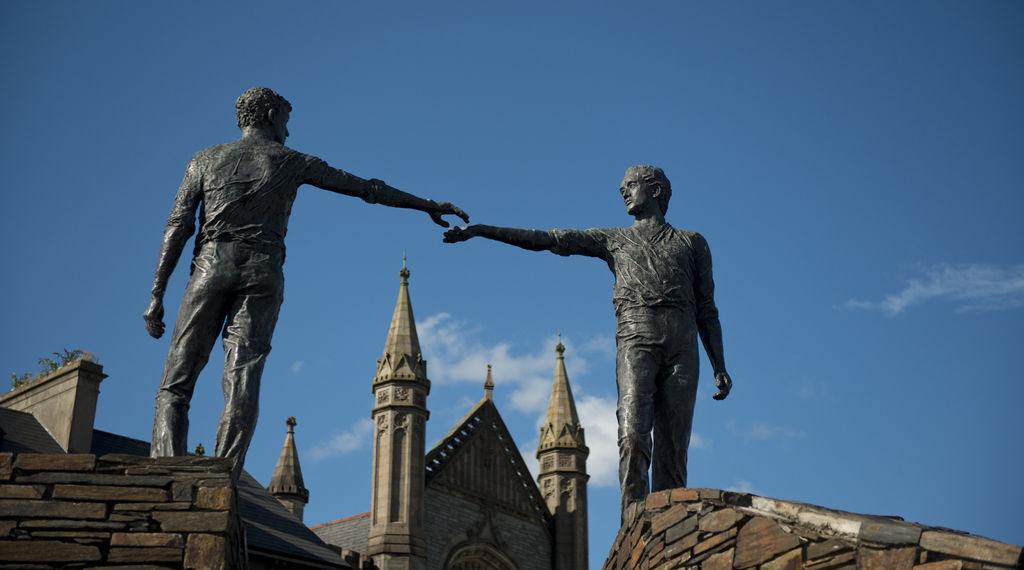 Daniel had a tight new haircut. I had sunglasses covering 40% of my face, flawless eyeliner and far too many outfits. Off we set for my birthday treat – a weekend in Derry staying at the lovely Shipquay Hotel.

We were greeted with smiles, recommendations for our trip, champagne, prosecco, truffles, and even homemade fudge and shortbread.  As I had supermarket watermelon and he a soggy wrap for lunch on the way up, it felt like we had just been upgraded two classes on the Titanic.

A Weekend in Derry: far from bog-standard

Dinner was booked for 8:15. The dining room had all the elegance of a posh place but without any snooty vibes whatsoever. The staff were the epitome of politeness but not afraid to engage in banter.

To illustrate, as we settled into our velvet chairs to browse the menu pretending we hadn’t already scanned it for half an hour in the car, the manager bounced over and asked me if I had been shopping recently… before subtly snapping the price tag off the back of my new blouse.

I wasn’t even embarrassed, just totally impressed and grateful!

The menu has so many locally sourced delicacies it was like a map of Northern Ireland. I opted for a smoked Fermannagh duck, asparagus and grapefruit salad to start, followed by Redcastle Monkfish and chilli crab linguine. Daniel went for scallops and then another duck dish graced the table for his main.

READ NEXT: Is This The Best Bed & Breakfast in Northern Ireland?

The central location of the hotel in the compact city centre meant we were a few steps from the Saturday night scene. We went to the lively Dungloe Bar and pretty much became members of a random hen party for the night. We’ll say no more.

Returning to the hotel in the early hours, the night porter suggested that we go down to the hotel bar. There, Daniel decided that he would ask could he buy a wee snack.

The barman disappeared for a minute and returned with a big bowl of complementary parsnip and beetroot fries that the chef had whipped up. We were shocked and thankful for this gourmet 2.30 am snack, especially given that everything tastes even better when you’ve had one or two drinks!

A pair of sleepy heads emerged in the morning somewhat reluctantly at about 10 to 10. We just didn’t want to miss what we knew would be an absolute feast.

The breakfast was included in our package and we got to eat the magnificent buffet spread and pick whatever cooked things we wanted from the menu.

I was delighted with my scrambled duck eggs and Donegal smoked salmon as well as the array of cheeses, meats, fruits and bread on offer, with a perfect flat white and the juiciest orange-est orange juice I ever did drink.

The only criticism I have is that I would have loved to have been able to sleep in for another hour!

Well fuelled, we set off for mass at the enormous St Eugene’s Cathedral on the Bogside, which, like everything, was less than 10 minutes away from our base. An obligatory photograph at the “Free Derry corner” ensued. A visit here is one of the top things to do in Derry.

Next on the agenda was a guided walk of the city walls with Martin McCrossan City Tours. This was very interesting an informative, albeit difficult to take seriously as an elderly woman on the tour with us kept interrupting to tell the guide he had lovely hair.

I found the tour guide failed to mention a few points I would have thought crucial to the story of Derry and in doing so gave away his political bias.

That said, I think it’s important for us to be exposed to history from different people’s perspectives. Whether you have just a few hours or an entire weekend in Derry, I would say some sort of walking tour is a must. 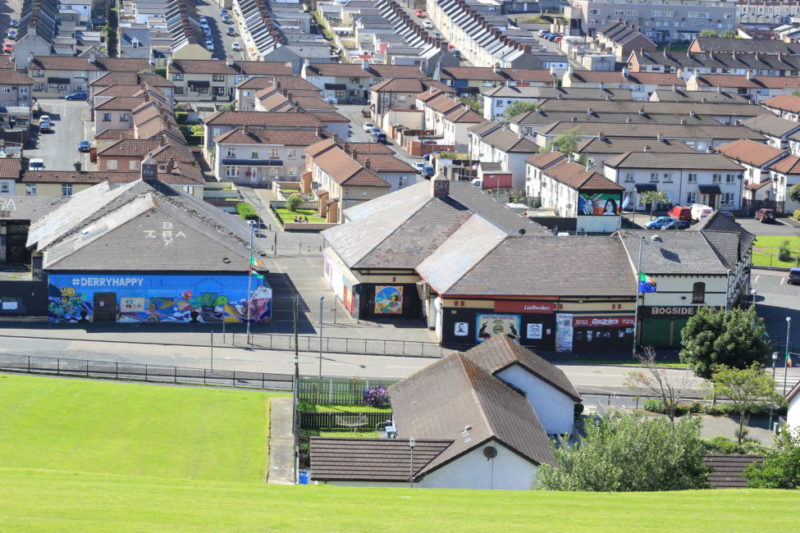 We walked the walls and heard about emigration, early settlement, the Apprentice Boys, the civil rights movement, internment, the troubles, and finally – peace.

It took about an hour and 30 minutes and included a cup of tea or coffee at the end, all for a very reasonable £4 each.

We got the added bonus of a handshake from a vital peace process figure, Reverent David Latimer en route. He abandoned his car in the middle of the road to run over and say hello. Our pensioner friend fancied his hair too.

By this point, we were well ready for our lunch platter back at the bar in Shipquay. Although I had to horse it into me quickly before Daniel ate it all, the selection of finger foods for us to share like ribs, honey-glazed sausages, cheeses and pastries hit the spot. 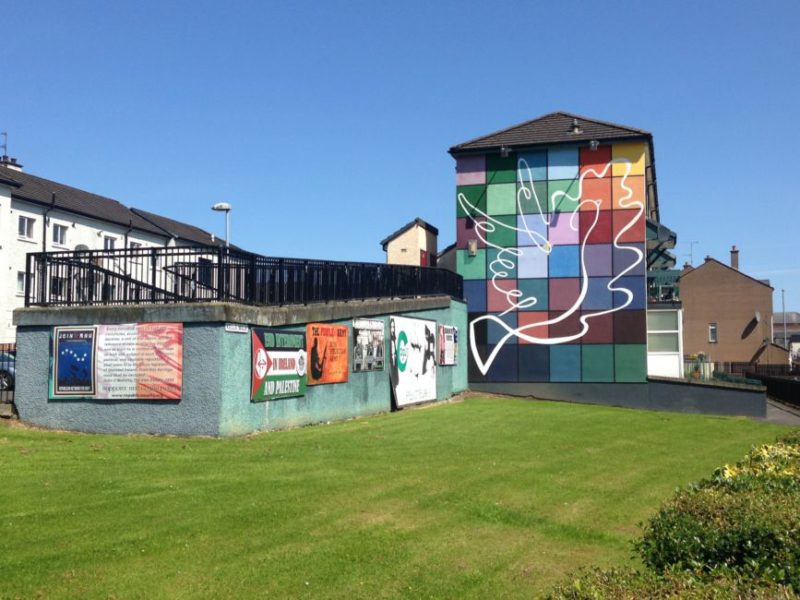 We were told Exchage or Fitzroys were the places to go for our Sunday evening meal, but by the time we had got ourselves looking like 10/10s again, it was so late that we thought we should get another feed in the hotel instead of going out somewhere and being disappointed when we couldn’t get a table.

After a weekend of indulgent eating I was gasping for more vegetables, so I opted for a meat-free choice – butternut squash and chickpea curry with spinach bread and veg filled rice. It was a guilt-free party in my mouth.

Meanwhile, Daniel had his face wrapped around a dripping, fully loaded beef burger as he was still running with the mantra “sure we’re on our holidays”.

The live traditional music flowed up the street from Peadar O’Donnell’s bar as we approached.

We installed ourselves in some prime seats, made friends with more strangers and belted out the tunes. An English lad asked me if it’s always like this on a Sunday night in Ireland. I confirmed this to be true. 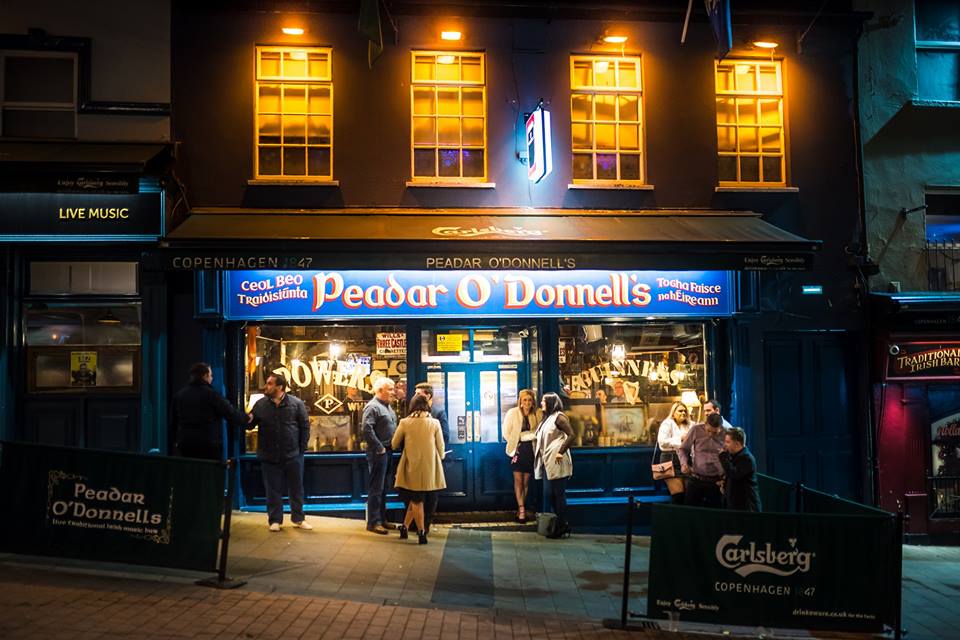 The Museum of Free Derry

As our walking tour guide gave us what I perceived to be a more unionist sided version of history, the Museum of Free Derry got our business on Monday morning.

It was heart-wrenching. I cried. It is imperative that you go and experience this museum for yourself. It educates about the civil rights movement and the Troubles, and everything about Bloody Sunday.

I already had considerable knowledge about these atrocities, but the real banners, posters, propaganda, video footage and even clothes worn when people were shot brought the events to life and I left with tears to my eyes. 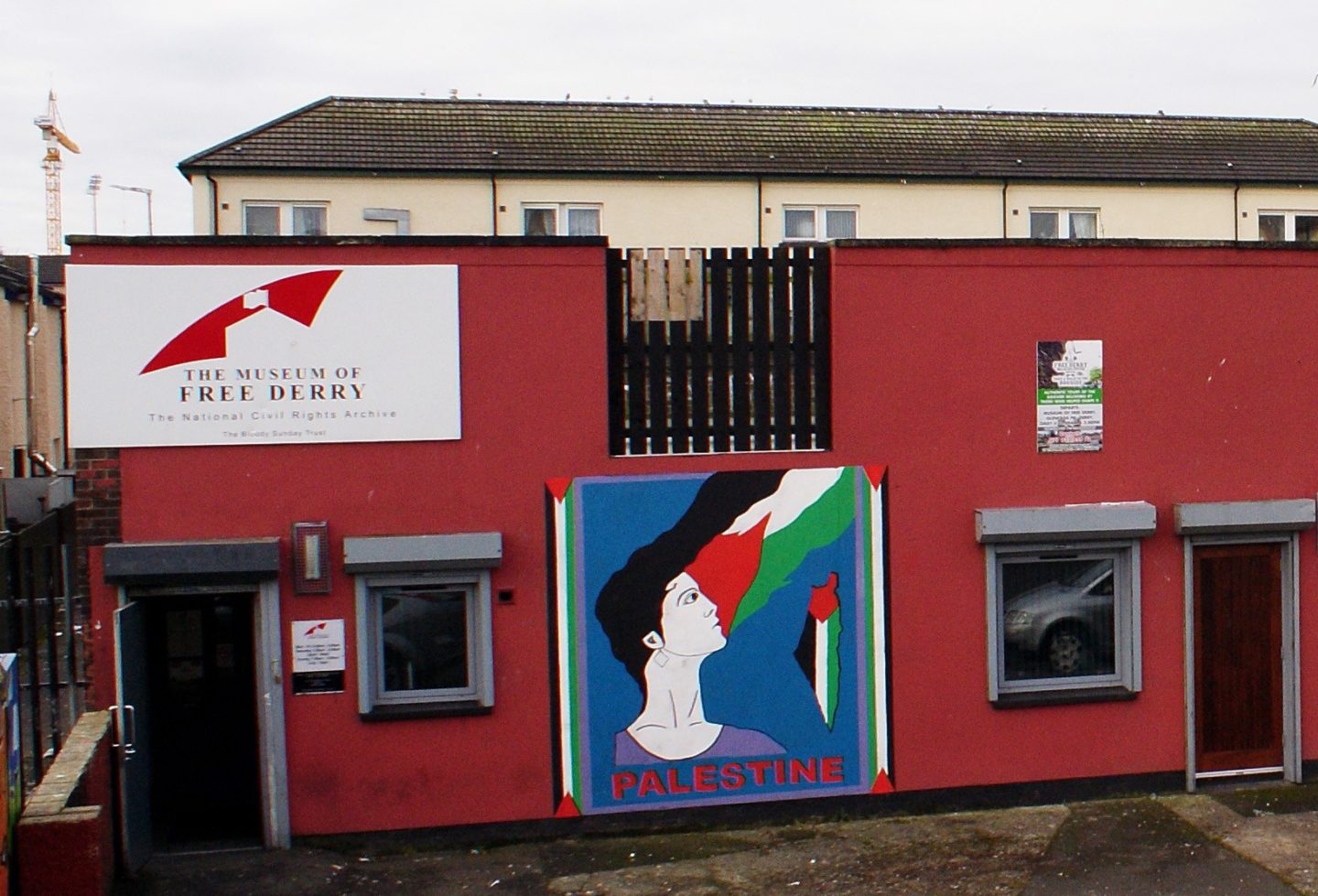 Our final stop was on the banks of the Foyle. The Peace Bridge links the largely Unionist east bank of the river to the Republican west bank, and the sloping design is meant to symbolize the coming together of the two communities. 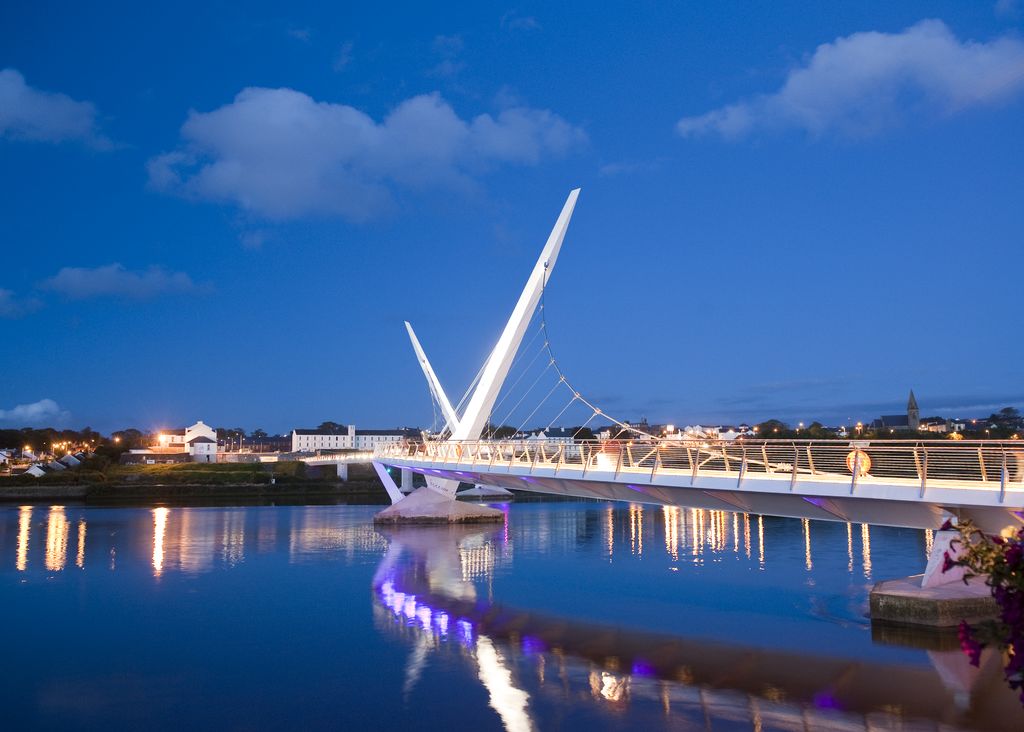 As we packed the car to head for Donegal, I promised the amazing staff at the great value Shipquay that I’d be back. We had such a luxurious stay for a great price.

I’ll take my mother next time. Not because Daniel was bad company, just as there were so many lovely boutiques that I knew I couldn’t enjoy with a boy who hates shopping in tow!

I left our weekend in Derry with a few pounds less in my pocket, a few pounds more round my waist, and full of compliments for one of the most interesting city breaks I could have asked for. 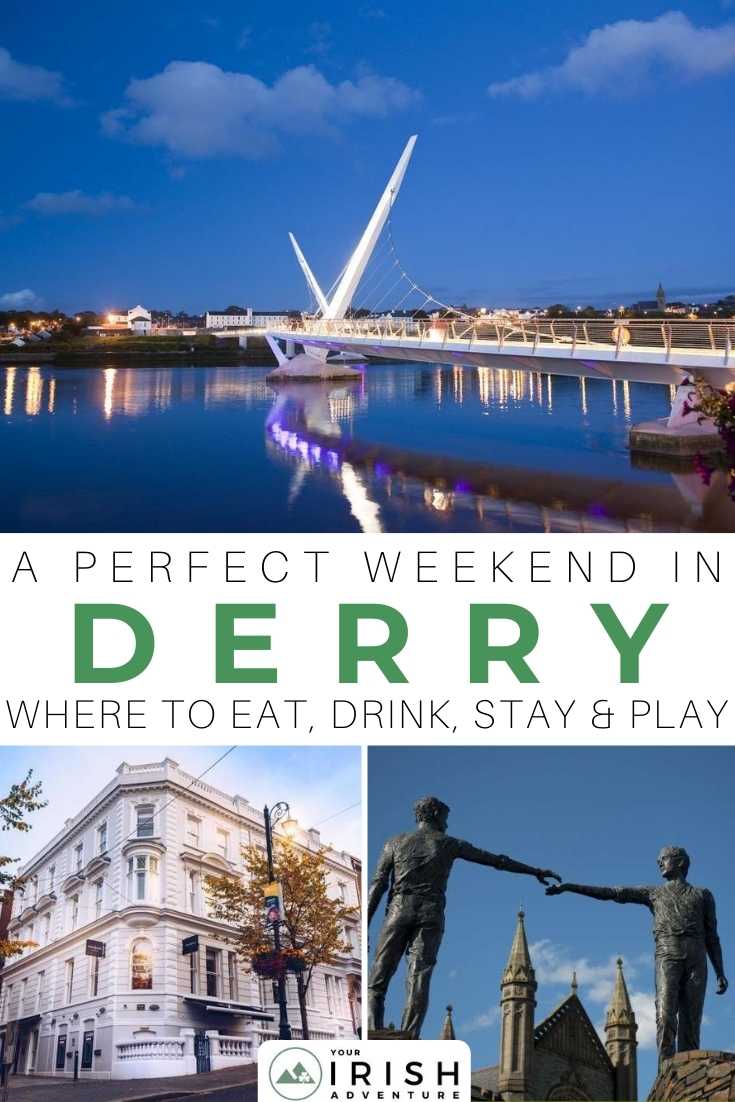 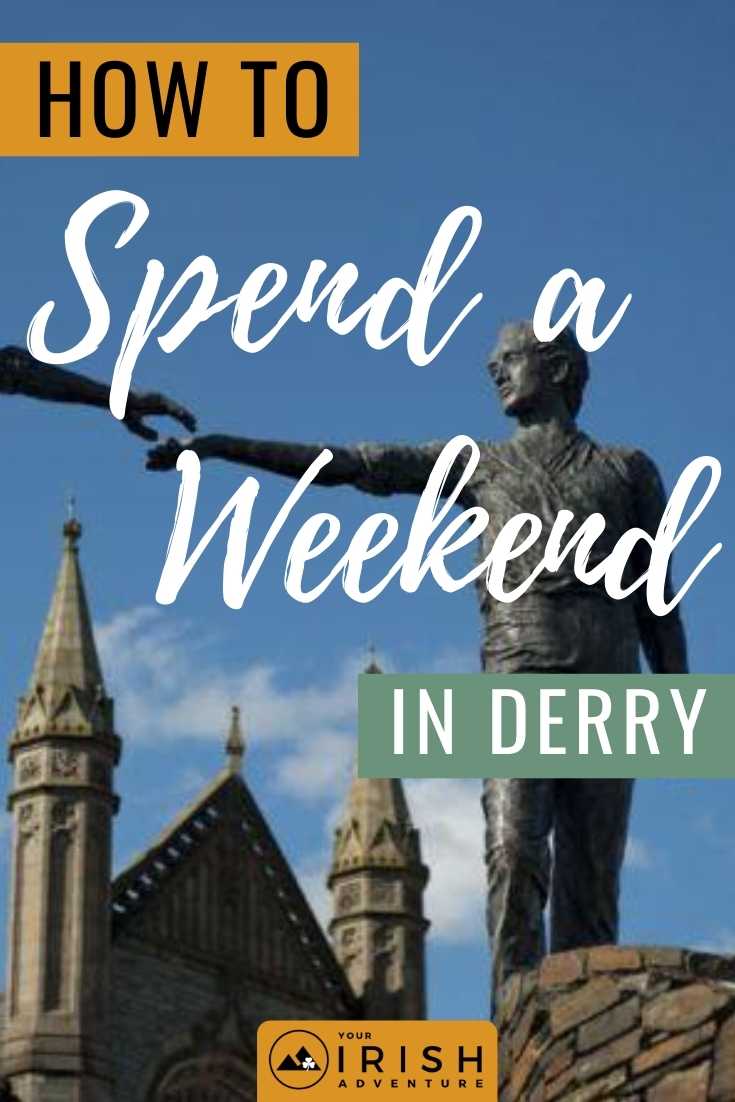