The ruin of medieval Dunluce Castle has a long and dramatic history that can be traced back to as early as the year 1500. Today it is one of the main attractions on the North Antrim Coast and is regarded as one of the main historical sites in the whole of the North of Ireland. The ruins are spectacular and well worth a visit, but the highlight of Dunluce Castle for me is the breath-taking views that surround it.

It is situated between Portballintrae and Portrush, two of the most beautiful seaside towns the North has to offer. Dunluce Castle is a great location for a day out, here is a guide that will tell you all you need to know before visiting the site! 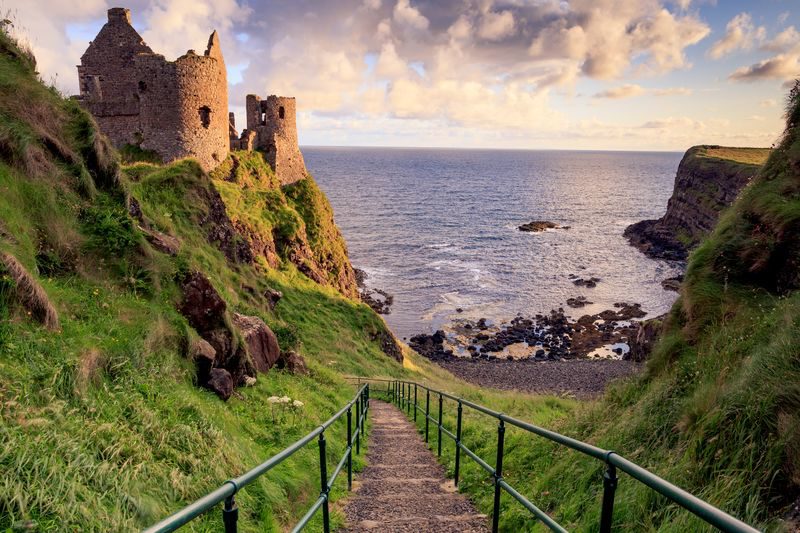 HISTORY OF THE CASTLE

Dunluce Castle was built in 1500 by the MacQuillan family who first came to the North coast from Scotland in the 1200s. The MacQuillans were the original occupants of the castle but it was later besieged by the MacDonnells following a series of battles. 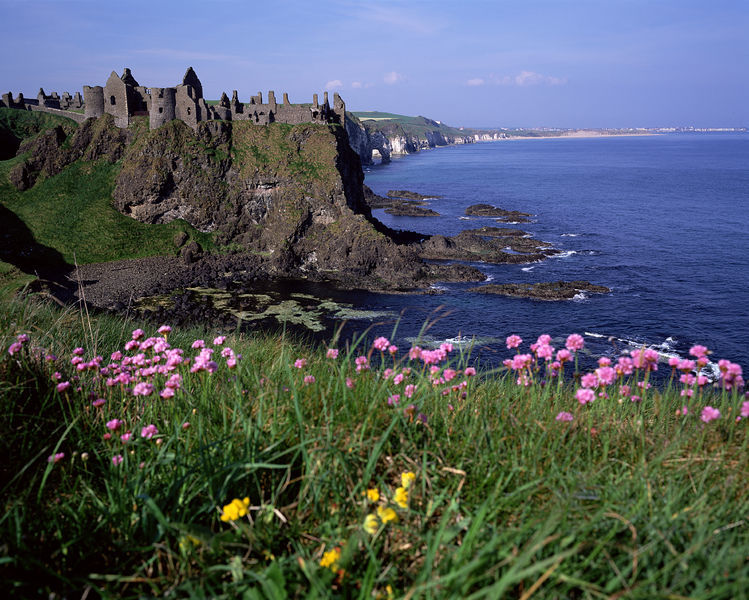 The British besieged Dunluce Castle in the 16th century and on numerous occasions over a 100-year period. Today it is a popular attraction for those who are interested in the battles here, as well as the tales of a banshee and the mysterious night of 1639 that you can read about below.

The MacQuillan family held the castle for around 55 years until they were displaced by the MacDonnell clan. The two clans were once believed to be allies, but a dispute between the MacQuillans and famous warrior chieftain Sorely Boy MacDonnell created a power struggle. There were two battles between the clans, the first was fought on a plain about half a mile east of Ballycastle. It lasted around two days and resulted in both forces suffering significant losses. After the battle the MacQuillans retreated, setting up camp near Slieve-na-Aura, a mountain that sits on the edge of the Glens of Antrim.

Step back in time at the medieval Dunluce Castle, County Antrim. If these walls could talk we’re sure they’d tell us a tale or two! One particular legend that resonates with us is the story of the castle’s kitchen crumbling from the grasp of the cliff edge to the sea below, taking seven of the castle’s staff members to a watery grave! Watch your step on your next visit… 📸 (@luke_storey) #loveireland #ireland #irland #irlande #irlanda #northernireland #discovernorthernireland #dunlucecastle #antrim #causewaycoast

The MacDonnells initially gave chase to the MacQuillans, only stopping once they reached the banks of a small river called the Aura. When the Prince of the O’Neills of Clandeboy, Hugh MacFelim O’Neill arrived at the camp of the MacQuillans with reinforcements, he ordered his cavalry to pursue the MacDonnells.

According to the story they soon became tired during their pursuit and attempted to retreat but were cut off by Sorley Boy and his men. It is said believed that the MacDonnells covered a bog with rushes and stationed a few men on firm ground, fooling the MacQuillans into charging into the bog and resulting in their total defeat.

The battle came to be known as the Battle of Slieve-na-Aura, given its location. After the MacQuillans were defeated, the MacDonnells took over Dunluce Castle becoming the new occupants. 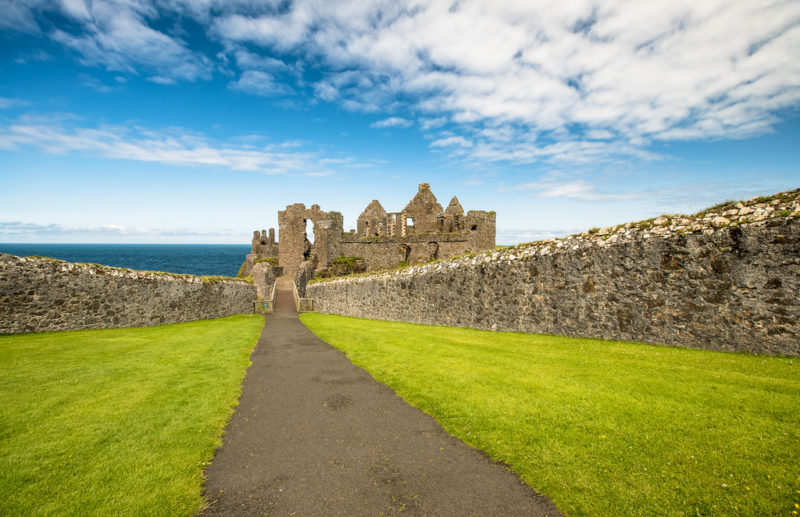 THE CASTLE AND THE ENGLISH

During many assaults on Dunluce by the English, the castle was used as a battleground. The English took the castle from the MacDonnells who made numerous attempts to win it back. They eventually did, after they climbed into the corner towers and hanged the English captain. Legend says that his ghost still haunts a tower. 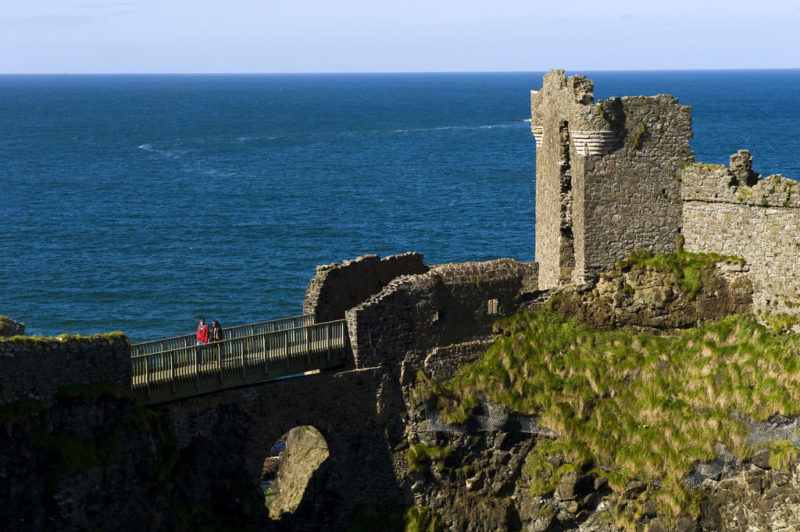 Legend states that during a stormy night in 1639 part of the castle broke off, plunging the kitchen into the sea. All the cooks and kitchen-hands were killed, only a kitchen boy survived. There remains a dark hollow in its place where you can still see the oven, fireplace and entryways into the kitchen which is still intact.

THE BANSHEE OF DUNLUCE CASTLE

Dunluce Castle is situated on a cliff that rises high above the sea, so it doesn’t surprise me that many people have met their deaths here. For hundreds of years, there have been reports of ghostly sightings. Visitors have come back with bizarre reports of disturbing cries and high-pitched screams from within the Northeast Tower. They say it is a banshee who is responsible for these agonizing sounds.

The ‘Banshee of Dunluce Castle’ is believed to be that of Maeve Roe, only daughter of Lord MacQuillan. Maeve’s troubled life and tragic ending is the reason those with a knowledge of the castle’s history have linked her as the source of these wails.

Under her father’s wishes, Maeve was to become betrothed to one Richard Oge but she refused, as her heart belonged to her lover Reginald O’Cahan. Lord MacQuillan was not happy with his daughter for defying his wishes, so he held her in the Northeast Tower of the castle. Each night and day, Maeve looked out of her prison hoping that her love would come and rescue her.

Eventually, Reginald O’Cahan did arrive at the castle, on a dark and stormy evening. The couple secretly left the fortress, fleeing into the night. They departed in a small boat with plans of settling in the nearby seaside town of Portrush.

But the sea was particularly wicked on this night and it was hard for the tiny boat to fight against the huge waves. In the end, it was overturned, and the two lovers sank into the sea, still holding each other tight. Maeve’s body was never recovered from the water.

They may have forgotten about recovering Maeve’s body long ago, but her cries are still heard as her ghost haunts the ruins of Dunluce Castle. As her tragic soul roams the ruins, it is said that she stops at her prison tower to look out across the sea, mourning a rescue that was never completed. 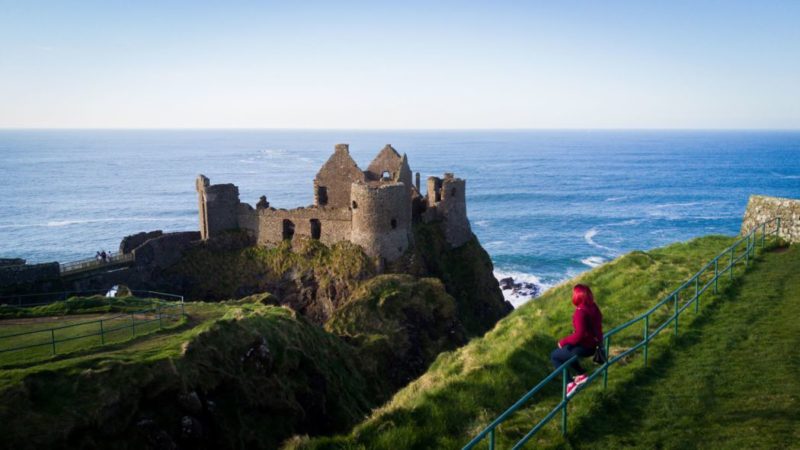 If you are a Game of Thrones fan, then you will know that there are many breath-taking locations in the North of Ireland that have been used in the HBO series. The ruins of Dunluce Castle is the real-life location of the Greyjoys’ seat of power, although a bit of CGI was required to fill in the gaps. They are ruins after all!

Below the castle ruins is an underground cave and a passage that leads to a pebble beach. If it’s open, venture down the path to the cave. Take your chances and prepare for a picnic if you fancy it. Sometimes it’s closed, so you can always go to the picnic area on the site – this is what I did – either way you can enjoy lunch with a view. 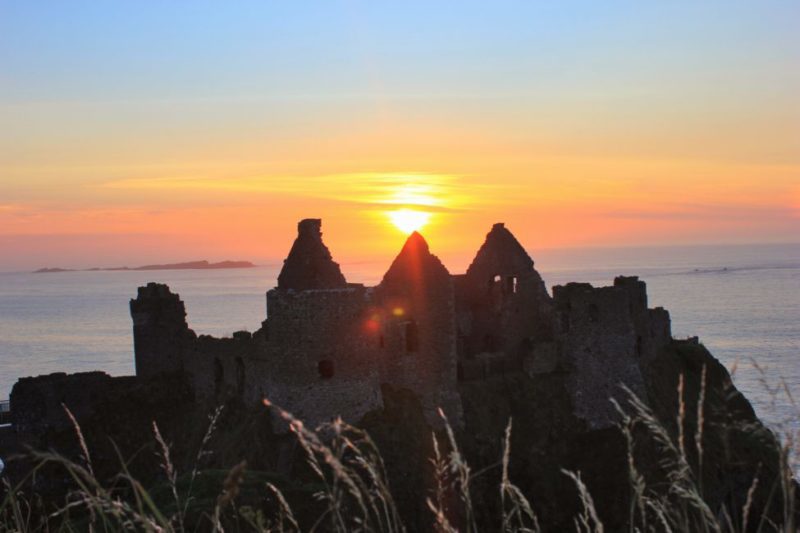 HOW TO GET THERE

There are 3 ways to get to Dunluce Castle from Belfast – by train, by bus or by car.

You can get the train from Great Victoria Street train station or Belfast Lanyon Place. You need to get the train marked for Derry, there is one available from both stations every hour. After a 1-hour 40-minute journey you will be at Coleraine, get off here and grab a taxi, it will be around 10 minutes before you arrive at the castle.

It is £19 for an adult return but £12.70 after 9.30am. Tickets can be purchased from the train station. There is a fare calculator you can use to calculate the cost of all rail travel!

Travelling by car may be a preference for those who enjoy a bit of scenery. If you take the M2 from Belfast and follow the signs, the journey will be straightforward enough. Take the coastal route and you will witness some of the Antrim Coast and Glens Areas of Outstanding Natural Beauty.

Playing around with some composite work today! Visited the fantastic Dunluce Castle but the sky was pretty grey and overcast so I photoshopped in a sky from the day before in Derry City. #discoverni #discoverireland #failteireland #wanderireland #thevividworld #instaireland

There is a café next to the castle, but I wouldn’t recommend it. Like a lot of tourist spots, it is a bit overpriced. I also wouldn’t recommend a guided tour, there are audio guides as well as iPhone and Android apps available that will allow you to explore the castle on your own.

General opening times for the castle are 10 am to 5 pm daily, with last entry at 4.30pm. It gets quite cold along the North coast during the winter-time, so I would recommend going between the months of May and August. For me, an early start is ideal, so I’d suggest getting there for around 11 am. Getting there early meant we could finish our trip with a visit to Portstewart, I would highly recommend doing the same. Check out our guide to visiting Portstewart on our website!

If you’re looking for a place to stay near Dunluce Castle, have a look at our article about staying in the nearby town of Bushmills, home of the famous Bushmills Whiskey

Kelly Mc Allister is a journalism student from Belfast. Passionate about social affairs and travel, she is happiest when writing about the two. 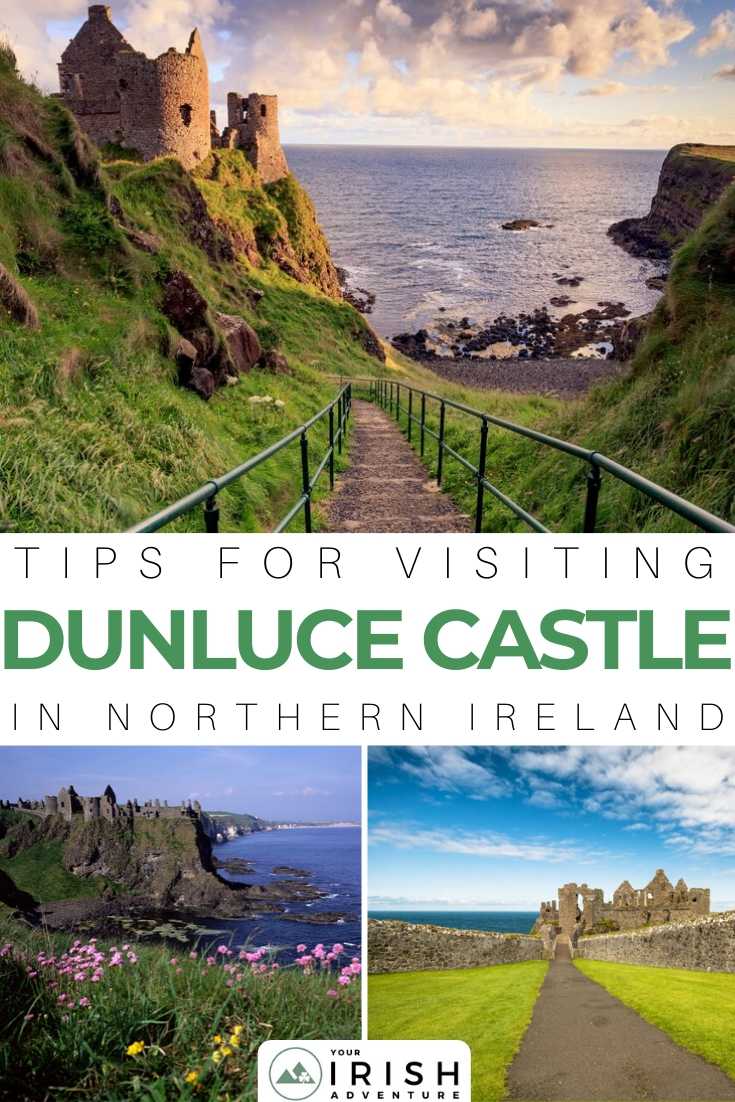 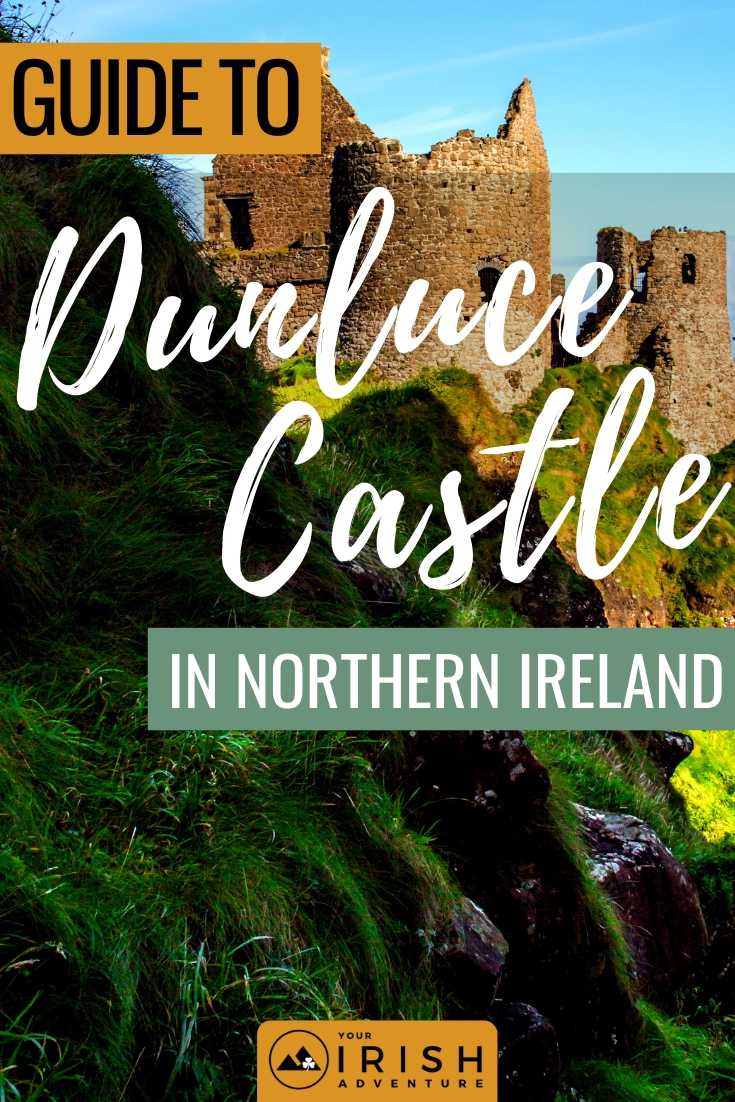